Last weekend, we were lucky enough to screen in three different film festivals around the country (Freak Show Horror FF in Orlando, New Orleans Horror FF, and the Landlocked FF in Iowa City). We even were nominated for two awards at the NOHFF: Best Feature and Best Actor. This weekend is no different as we have another three fests, all being much closer to home.

Things start this Friday, Nov. 2 at the Central Wisconsin Film Festival. Adam and I will both be attending, and fielding a Q&A after. Screening starts at 7pm with five short films screening before Dead Weight.

On Saturday, Nov. 3, the Drunken Zombie Film Festival in Peoria, IL will be screening Dead Weight at 2pm. Sadly, we will not be in attendance for this one, but our great friends, Steve and Kevin of Slasher Studios, will be there for their riot of a short, Teddy (screening on Friday at 10:30pm), so they'll be representing Wisconsin horror for all of us filmmakers.

Closing out the weekend will be our screening at the Madison Horror Film Festival, on Sunday, Nov. 4 at 5:40pm. I feel like this fest is nothing but a reunion of friends, and I am more than okay with that. At 5:50pm on Saturday is found., which screened with us at Elvira's Horror Hunt in September. It'll be great to see writer/director Scott Schirmer once again. Closing out the day is a double feature of filthy proportions, with Cory Udler's IDS Rising and Derrick Carey (Dead Weight colorist) will be representing Oshkosh's very own, Swamphead. Looking at Sunday, Slasher Studios' Teddy will be hitting the screen at 1:05pm, and Other screens immediately before us at 5:25pm. Don't be fooled, I only listed a portion of the films to be shown over the two-day fest, so do check out the link above for all the other great titles.

On a final note, we are beyond thrilled to be nominated for four different categories at the Madison Horror Film Festival: Best Feature, Best Director, Best Writer, and Best Cinematography. Many of the other nominees are friends I listed above, so I know regardless of who wins, it's going to be an excellent time. Congrats to all the films we are screening with this weekend! 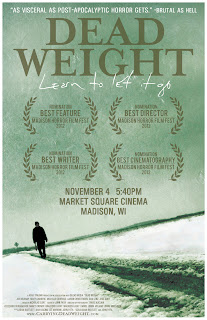 UW Oshkosh Film Society presents a special and free screening of Dead Weight tomorrow night. Adam and I will be present to talk about the film afterwords. More info can be found here! 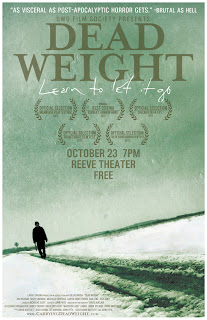 The fabulous folks at the Landlocked Film Festival interviewed Adam and I, in preparation for our screening on Saturday, October 27th. Probably to no surprise, we managed to talk about Kurt Russell yet again. Check it out for yourself.
Posted by John Pata at 2:23:00 AM 0 comments