DEAD WEIGHT: THROUGH A STILL LENS

Producing a film is a long, tumultuous process. It takes an immense amount of preparation and can sometimes seem like an insurmountable task, especially when produced independently. “Though A Still Lens” takes us behind the production of Dead Weight, a feature-length film written and directed by Oshkosh natives Adam Bartlett and John Pata and produced by Lee Marohn and Dan Kiggins. It was filmed in and around the Oshkosh area during twelve days in 2011. The film tells the story of Charlie Russell, following him on a journey to find his girlfriend, Samantha, in a world destroyed by a biological outbreak.

Early on in pre-production, the filmmakers knew they would want someone to document the filming process. To achieve this they brought on longtime friend and accomplished still photographer, Mary Manchester. Over the course of the initial week of filming in April, and first day of May, Mary took over 1,300 photos of every aspect of the production. “Through A Still Lens” is a photography exhibit that showcases a small portion of these images, all favorites personally selected by the filmmakers and Mary Manchester. The exhibit premieres at 6:00 PM on October 1st, 2011, at the New Moon Café at 401 N Main St., Oshkosh, WI during the October Gallery Walk. The photos will remain on display throughout the month of October.

During the exhibit there will be a new trailer for the film premiering, alongside the unveiling of the film’s theatrical poster. Many members of the cast and crew will also be in attendance during the exhibit premiere. 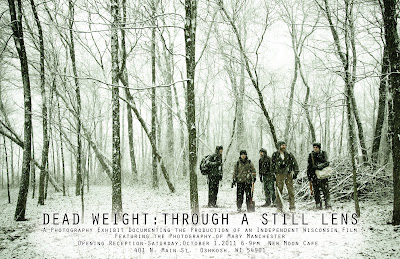