Thanks to Matthew at the Advance-Titan for taking the time to chat with us and write up this article.

On Tuesday we sat down with Charles from the Northwestern to chat about Dead Weight. Great time chatting. Thanks, Charles!

This morning, at 9:24 AM CDT, we received an email notifying us that the Dead Weight two-disc DVD release has shipped from the manufacturer. Not only does this mean we WILL in fact have DVDs for sale at the premiere screenings this weekend, but we have also begun accepting pre-orders online!

Orders are scheduled to ship out from Head Trauma Productions HQ on or around Friday, April 6th. If you are planning to attend the premiere then please do NOT purchase a copy of the DVD online as online pre-orders can NOT be picked up at the premiere screenings this weekend. They can only be shipped!

Currently we are only offering US shipping, but we will be ironing out International shipping next week after we get our heads back on straight. The Fog will be thick this weekend, the weight will be immense.

You have a couple options for ordering. You can order the regular edition two-disc DVD, or Tony Moore artwork edition. They have the same content, the only difference is one has Tony Moore's unbelievable artwork printed on a slipcase that goes over the DVD case. On top of that you can order your choice of DVD alongside a Dead Weight shirt (women's sizes available), and your choice of poster, at a discounted price. Oh yes, did we mention we got new posters with the art from the DVD cover? We didn't? Consider yourselves informed, friends!

We are exploding with energy. Life couldn't be more surreal right now. Many thanks to all of the folks who interviewed us this week for helping to keep that flow of energy constant and intense.

Here are some photos of things you should buy. You can buy them online here: http://headtraumaproductions.bigcartel.com/

The fine folks at WLUK Fox 11 Green Bay were kind enough to have us on for their morning show, interviewing with Pete Petoniak. We had a blast this morning, and it's nice to have a good reason to wake up at 6:30am and get a start on the day!

Check out the video and online article here:

Many thanks to the crew at WLUK for having us on! Much appreciated!
Posted by Adam Lee Bartlett at 10:44:00 AM 0 comments

John and Adam sat down with Dean from Oshkosh Today to talk a bit about the premiere on the 30th/31st and about our venue, the non-profit Time Community Theater.

Check out our episode online or catch Oshkosh Today on CATV2! Connie and the team at Oshkosh Community Media Services have been incredibly supportive of many projects we've worked on. We can't thank them enough for their dedication to a mission of making Oshkosh a greater community for everyone. A mission that is very much in line with our own, and one of our primary motivations for seeing this film through to the end.

DEAD WEIGHT has been selected to screen at the Chicago Fear Fest on April 13, 2012! We are most excited, and hope to see many of you there!

Find out more about the Chicago Fear Fest, including lineup, at http://chicagofearfest.com/


Adam here. Just want to take a moment to keep you posted on things on our end. We've been working furiously to get everything finished up for the DVD release of Dead Weight so we can have discs to sell at the public premiere the end of this month. As of Sunday evening the only remaining puzzle piece was the second disc. All artwork, and disc one master, have already been sent off for duplication. John and Adam reviewed the components for disc 2, John has been working overnight to make minor changes and author the dvd, and we're shipping it off Monday evening at 6pm via next day air to the manufacturer.

As soon as we both get a little sleep we will be setting up pre-orders for the double DVD release. Folks may be wondering, what exactly will be included in this package and why the hell has it taken so much work to get it finished? Good question. Now here's a good answer…

There you have it, that's what has taken us so long. As you can see we have packed the DVD release FULL of bonus features. Stories Form Production & 685 Miles To Wausau both feature numerous interviews with cast and crew, alongside some other juicy goodies we cut in, just for the fans that want to know everything. This includes tons of behind the scenes camera footage and images of early Dead Weight plot and writing notes.

You will not be disappointed, dearest friends. Worth your hard earned and hard saved pennies, most assuredly.

Pre-orders are coming by the end of the week and will be posted at http://headtraumaproductions.bigcartel.com/ . We're hoping to include a poster + tshirt package option as well. If you're lucky we just might have a new shirt/poster design in that package, too!
Posted by Adam Lee Bartlett at 5:00:00 AM 0 comments

Something we've kept a little quiet, is that we've had an incredible artist lined up to create the variant DVD art. That artist is the Sausage King of Comics himself, Tony Moore. You might be thinking, "Hey, I know that name!" As you should, friends. His art has graced the pages of The Walking Dead, Fear Agent, Battle Pope, Ghost Rider, The Punisher and Venom (to name a few).
We are thrilled to have his talent represent Dead Weight (for the limited edition slipcase), so feast your eyeballs on this! 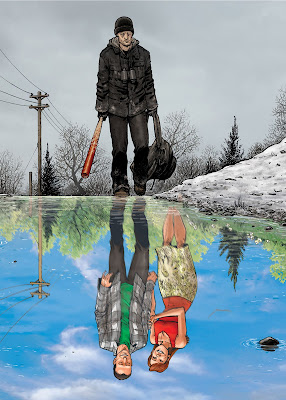