AND THEN THERE WAS EDITING

Say what? It's been two and a half weeks since the last blog update? What in the hell is going on around here?

Oh, yeah… post-production. Even though we have a few days left to shoot (which were scheduled for May but now have been pushed back to June), I have been in an editing frenzy, especially the past couple of days.

For those that know me, it's no secret: I love movies. Yeah, I know saying you "love" something is cliche and can even be generic as hell to say. But it's true. I became infected with the movie bug at a very early age in life. On top of loving movies, I love the process of making a movie. One of the culprits for this love of film making is most certainly the terrific (and gone but not forgotten) TV show called Movie Magic. As a young lad, I ate this shit up. Seeing that I grew up on a heavy dosage of horror, sci-fi and action flicks, Movie Magic just furthered me asking the question, "How'd they do it?"

I never had much of a desire to be in front of the camera, I always wanted to be involved in the process. Wait, that's not entirely true. Even to this day, I am more than willing to be a body in some huge gore scene. Ah… a boy can dream, right? Wow, what the hell am I going on about?! Jeez, put a keyboard in front of me and I will just type and type and type…

Okay, I am going to get to the point. As I already stated, ever so generically, I love movies. I love making movies. I really enjoy every step of the process, however, post-production (editing in particular) holds a special place in my heart. Which is kinda of funny to me, seeing that editing is very similar to putting together a puzzle. I don't really like putting together puzzles. As the kids say, WTFuck?

I started editing about three days after we finished principle production, but haven't really devoted all my time to it until now. In the last 36 hours, I have spent over 24 hours editing. That's a lot of time spent with these characters in this little post-apocalyptic world that Adam and I have had in our heads for almost two years now. Which is why I am so drawn to editing: you finally get to see the film. Yes, it was an absolute trip (really, did I just say "trip"?) to have our first cast reading, see everyone in wardrobe for the first time, get on location, and actually create this film, but in editing you finally see it all come together.

There's a lot of (insanely awesome) people (who I am forever grateful for) that can back me up on this: the week of filming was rough. Don't get me wrong, though, it was easily the best week of my life and I wouldn't want to change a single moment of it, but it was an absolute test of human will. Need proof? Look at this photo of Adam. The way he looks in that pho 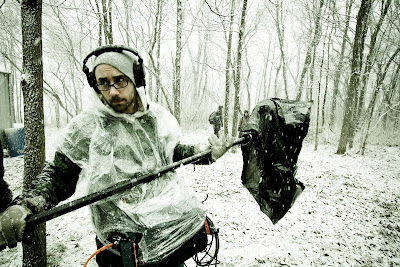 to is how we both felt for seven days straight. On top of not getting more than three hours of sleep each night, we faced pretty much every miserable filming condition possible in the first four days. We had to rework/rewrite scenes on the spot (courtesy of a wonderful mid-April blizzard), find new locations last minute and deal with all sorts of other stress. In what should have been a complete and utter disaster, turned out to strengthen the film because of the cast and crew. They might not be totally aware of this, but they are the reason Adam and I didn't lose it. With the conditions we were filming in, it would have been expected for every single person on the cast and crew to complain, get pissed, and quite frankly, give up. Hell, people took a week vacation from work (for one person it was the first in 23 years) to be a part of Dead Weight. It's not like anyone was getting paid, there really was no reason for everyone to power through it all. Except for the fact that they wanted to. The wanted to be with this project till the end and because of this fact, Dead Weight is NOT Adam and I's film. It is the film of every single person you will see listed in the credits.

Ah, again, with the tangents! I actually was on path to where I wanted to go, but it was just taking a bit to get there. I'm not trying to take away from everyone who worked on Dead Weight (don't you worry, you will be getting your own blog entry) but this entry is suppose to be about editing.

Talking about production does in fact deal with editing. As mentioned (and will be time and time again), it was one stressful week. When it comes time to editing, all that stress is gone, now I can solely focus on the footage and performances. And holy shit, has it been amazing. There's nothing like putting together a scene and realizing that every single aspect came together and the end product is better than you could have even imagined. This has happened so many times, and the reason for that 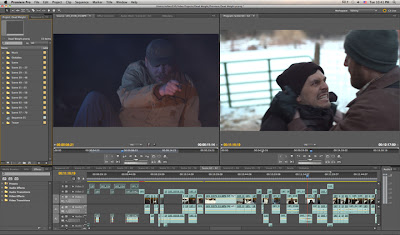 is because of the people we have in front of the camera. I know most of you reading this know very little about this project (since Adam and I like to work in secrecy), but you will find out that this is one emotional film. Every actor was pushed to the limit, and then some. I'm not just saying that either, trying to be the guy who's all, "Oh, our film is so crazy, etc etc etc". From day one, Adam and I knew we wanted to make this film be about the characters and nothing else. If you go into this expecting to see a gore flick, tons of action, and not to mention zombies, you are going to be severely disappointed.

Again, getting off topic! My mind is going everywhere tonight. Okay, let's wrap this up. If you read this whole thing you know I said a lot, but not so much about editing. Here's the abridged version of what I wanted to get at: tons and tons of editing, so many awesome shots (thanks to Travis), so many amazing performances (thanks to the cast), so much excitement and we cannot wait to show you all this film.