ONLY YOU CAN PREVENT FOREST FIRES

I debated whether or not to share this story. Not because I am embarrassed, or anything like that. I just wasn't sure if people would want to hear such a story. But, then I thought, hey people like to hear all the weird behind-the-scenes stories… so why not? Things are gonna get a little "risque" here, consider yourselves warned.

Day two of production started with us in a house, filming a little kitchen scene. This was a quite welcomed change from the insane winds we faced on day one. We spent a couple hours in the house, and had everything from moments of panic, to arguing, physical confrontation, and even projectile vomiting… and that doesn't even include what we actually filmed. Or does it?

Once we left the comforts of the house in the city, we 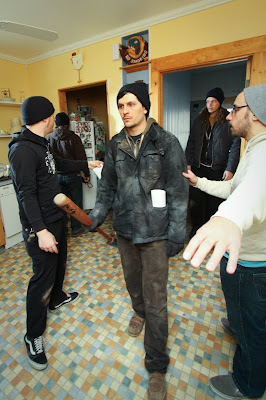 ventured back to the outskirts of town, to film the exterior shots of the house. As we finished our shots at this location, Cari pulled up with lunch/dinner, the infamous Wrap Car, as did three additional cast members; Matty Field, Jake Martin, and Mark Muetzel. It was time to step into the woods and film ourselves a scene around a campfire.

Nothing too bizarre yet. Just you wait, I gotta set it up first.

As we drive onto (producer/script supervisor/location manager/script editor/actor) Lee Marohn's step-dad's land, Travis (our DP) and I get the lighting/camera truck stuck in the mud. Tensions were high at the moment, but with the help of the crew, we got it out no problem. We carry all the gear a couple hundred feet into the woods, and start setting up for the scene. This was our first night shoot, and we had about eleven pages of dialog to cover. We knew it was going to be a LONG night.

For the campfire itself, well, it became everyone's arch nemesis. It didn't seem to matter where you were positioned, the smoke went straight into your eyes. The cast had to sit around that fire, smoke in the eyes, for a good three straight hours. In between every take, the cast shielded their eyes with their hands, hoping to find a few moments of comfort. Needless to say, once we wrapped the scene (around 12:30am), everyone was happy to get the hell out of there.

I know, I know, still not that bizarre. Well, hold onto yo' butts, here we go.

All the gear was pack 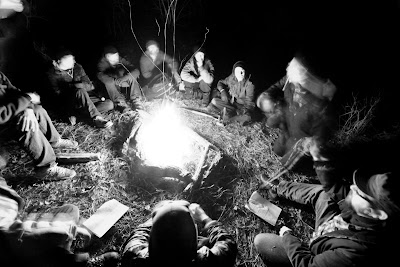 ed up, the cast was sent home and we were just getting ready to leave the location. And finally, that damn fire was extinguished. Now, it was dark as hell out there; no fire, no lights, just darkness. It was fairly dry in the woods, so we wanted to make damn sure the fire was completely out. All the water we had was dumped on the fire, and I don't recall exactly who it was, but someone piped up and said, "Anyone have to pee? If someone pees on the coals, that should do it." I did a little piss check. Yep, I should be able to squeeze something out.

So, there I stood, in a circle around the remaining campfire with Adam, (producers) Lee and Dan, and (crew members) Seth, Lance, and Cole. There might have been someone else, I can't remember. A few of the guys had flashlights, some were pointed on the coals, and a one or two were pointed at me, right on the crotch. Well, time was wasting, we all wanted to leave, so…

I was pissing on a fire, standing around with at least six sets of eyes, and flashlights, all on me. All male eyes, mind you. People were pointing out coals that were still hot, it was almost as if they all were my support, encouraging me on.

Now, I'm sure all of you are wondering, "Did you successfully put out all the coals, John?" You better believe I did. But, I can't say I've ever had a bunch of dudes stare at me when I was pissing, let alone with flashlights lighting up the scene. This is a great example of the strong bonding that happened on set. That, and I guess you could say that some people have shame. Sigh… I don't.

"FILMS ARE STRESSFUL, AND THEY'RE HARD TO MAKE..."

It's currently 12:54pm on Tuesday, June 7… and it's 92 degrees. That's the outside temperature. Inside my apartment it's gotta be at least a solid 10 degrees hotter. Ah, yes, the joys of living on the second floor without air conditioning. I was working on the edit some more, doing a little fine tweaking, but I had enough. Way too damn hot. So, I grabbed my laptop, retreated downstairs to the illustrious House of Heroes Comics + Games, to sit in the nice, comfortable, cool air and work on this blog.

It's been hot like this for the past few days now. Hell, maybe even over a week. When it's this hot (and without air conditioning), it's a constant state of discomfort. I don't sleep too much, my appetite is gone so I'm not eating, and I feel like stress levels are high. Hey, wait a minute. This sounds exactly like the week of production: High stress levels, little-to-no sleep, not eating… such fond memories.

Looking back, I wonder how my body ever made it through production. Over the course of our seven day shoot, the most sleep I got in a night was just over three hours. On top of that, I ate a whopping four, count 'em, FOUR, meals. Let's say you're one of those "normal" people who eat three meals a day, and you want to know how many meals you would eat in a week. Well, it's easy. You take three (meals a day), multiply it by seven (days), and your answer is twenty-one. Any "normal" person would have ate twenty-one meals that week. Me, I ate four. Now, don't be fooled. Don't get the impression that there wasn't any food to eat. We made sure to have plenty of food (on and off the set), but when I get in work mode, I just go.

Then there's the whole water thing. So, I am somewhat addicted to water. I drink an absurd amount of water. No joke, I easily drink hundreds of ounces a day. I always have my canteen on me, gotta have my water by my side. But, during production, well, that was another story. Just how I didn't feel the need to eat, I never really felt thirsty. Aside from that, my brain went: water = having to piss. Having to piss = taking time away from filming. Taking time away from filming = no good. This is silly. I mean, how long does it actually take to piss? if having to piss would really take time away from filming, how much time are we talking about? Exactly. Silly. But, like I said, when I get in work mode… There was actually one day, I can't remember exactly which one, but there was one day I got up in the morning and peed, and then didn't pee again until I went to bed… 21 hours later. That was the day I did not drink anything. Let me tell you, when I peed right before I went to bed, my pee wasn't clear. It wasn't yellow. It was a light brown. Yeah, never had that happen before.

Okay, I don't tell you all this to make me sound all bad ass and shit (if you know me, you know I am not all bad ass and shit). I don't tell you this, hoping I will get some sympathy (I did it all to myself, don't feel bad for me). I don't even tell you this to make the shoot sound crazier than it was. I tell you all of this for one reason, to show that while making a film truly terrific, it's also really damn hard. It's ugly. It's trying. It's challenging. It's painful. There's been extremely positive talk about the experience of making Dead Weight, and, without a doubt, it's all true. However, there's always two sides to a story. It's hard to appreciate the good without the bad, right?

It's rough making an independent film, and Dead Weight has been no exception. Think about it this way, when making an independent, DIY film, EVERYTHING is against you. If my memory serves me correctly, on day three, the beautifully amazing Michelle Courvais (who plays Meredith) said filmmaking is nothing but problem solving. This is so true it hurts. With this problem solving comes stress, and anger, and frustration, and depression, and… pretty much every other negative emotion one can think of. Sure, once all is said and done you forget the ugliness, focusing and embracing on the positive aspects of your experience. But this doesn't make it easy.

So, what makes it easy? What makes it possible to push your body through such hell to make a film? The night before production began, Adam was just getting read to leave my place, and I told him there was the first production video blog for The Hobbit, and we had to watch it. Let it be known, Adam is quite the Lord of the Rings nerd, and I am also a big fan, but I am Peter Jackson nerd. As we watched the ten minute video, we began nerding out, but also released we were getting ready to embark on a similar journey. Okay, maybe not a similar journey, but a film making journey nonetheless. As the video came to an end, Peter addressed the cast and crew moments before the cameras rolled for the first time on The Hobbit, and this is what he said: Films are stressful, and they're hard to make, but ultimately what makes them fun is the people you work with. And that, my friends, is the truth.
Posted by John Pata at 2:08:00 PM 0 comments