I've been to HorrorHound Weekend Indianapolis quite a few times now. In 2007, my good friend, Drew, and I attended the first HHWI. It was at that very con where I began talking with a (hunk of a) man by the name of Aaron "AC" Christensen. In the following weeks, AC and I reunited at Flashback Weekend in Chicago, where I was promoting my first film, Better Off Undead. After that, there was no stopping us, the bromance was set in stone. Little did I know, that first brief and nerdy conversation with AC at HHWI would not only establish a relationship with an incredibly close and dear friend, but four years later, AC would don a beard and a hard-nosed facade to play the role of Thomas in Dead Weight.

It was on the convention floor and during late-night lobby shenanigans at a few HHWs that producer Dan Kiggins and I continued to bond over our love of horror, comics, and punk rock.

Backtrack one and a half years ago to the last HHWI, March 2011 to be exact. AC, Dan, and I were there together, just a mere few weeks before production began on Dead Weight. AC's beard was underway, Dan and I kept breaking down the script and talking logistics, and I anxiously, albeit slightly nervous, began planting the seed in the brains of my peers about this film we were about to start.

Lastly, and by no means least, it was at last year's HHWI that Nancy Cremer, who I had plenty of communications with over emails, and I met for the first time in person. Shortly after, Nancy came into the Dead Weight family as one of our executive producers.

To summarize, HHWI has played quite a role, even if indirectly, in bringing Dead Weight to the screen. Perhaps it goes without saying, but on a personal note, I am beyond thrilled to return to HorrorHound Weekend Indianapolis next week (September 7-9) with Adam, AC, and Dan, on behalf of the Dead Weight family, and so many other friends I only see once or twice a year, to screen the film on Friday night.

Indianapolis, I hope you are ready to feel the weight, because I am more than ready for you to. 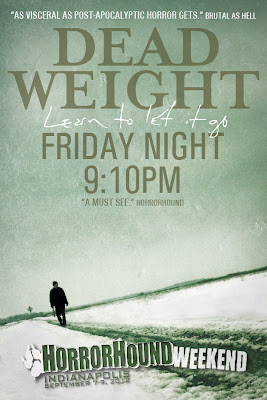 You just never know where Dead Weight will pop up...

1. Their song, "No Sleep", can be heard playing in the background of the scene where Charlie, Samantha, and Alex have dinner.
2. Eric Van Thiel, guitarist/singer, played Samantha's co-worker, Doug.
3. EVT wears a nifty shirt in the video.

No matter where you are, support your local scene and check out the video!


We can hardly believe the time has come to make this official announcement. This is, without a doubt, one of the most humbling pieces of news the Dead Weight family has been honored with receiving. We could not be more proud of our work together, and this achievement.

Dead Weight has been selected to screen at the Milwaukee Film Festival.

Many have been asking for a Milwaukee screening, here it is. This screening will sell out. Tons of Dead Weight cast & crew members will be there. It's going to be a once in a lifetime evening for us and, we hope, all who share it with us. Please, do whatever you can to attend. Stay tuned to Milwaukee Film for updates and schedule. We've spent months traveling around the US to take DW everywhere we can. In September, we bring it back home.

Official announcement can be found here. Jim and Bernie of The Walking Dead News Feed pulled Adam and I aside at Chicago Comic Con this past weekend to let us talk a little about Dead Weight, something we love to do.

Chicago Comic Con is just a day away! Holy smokes, and they even extended Thursday to be a full day instead of a preview night. Adam, John, Joe and crew member (The Great) Lance Ford will be representing the Dead Weight family all weekend in Artist Alley, booth #3217. We'll be located smack dab in the middle of Brian Defferding of Deftoons Comics and the fantastic Jim Boyle, who was our table neighbor from Philly Comic Con.

Don't be a stranger. Stop by the awesome section of Artist Alley (that's where we'll be) and say hi. We love high fives! 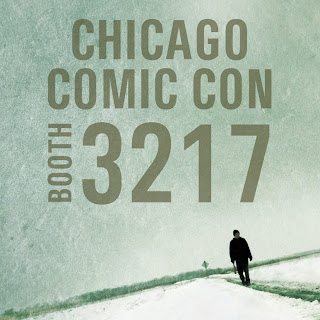